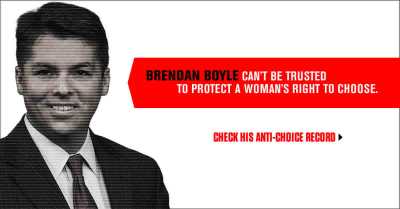 Boyle Voted for HB 574 Which Included Additional Requirements on Abortion Providers like Planned Parenthood. On May 11, 2011 Boyle voted for HB 574, “An Act amending the act of July 19, 1979 (P.L.130, No.48), known as the Health Care Facilities Act, further providing for definitions, licensure, fees and issuance of license; and making an inconsistent repeal.” According to the May 10, 2011 House Committee on Appropriations Fiscal Note for HB 574, “This legislation would provide a definition for an ‘abortion facility’ and include abortion facility under the definition of ’health care facility’; would require the Department of Health to apply the same fire and safety standards, personnel and equipment requirements and quality assurance procedures to abortion facilities that are applied to freestanding ambulatory surgical facilities; would establish a new $250 licensure application or licensure renewal fee for an abortion facility; and would require that the abortion facility is in compliance with the requirements of the Abortion Control Act (Chapter 32 of Title 18) for licensure. The legislation also repeals the definition of abortion facility from the Medical Care Availability and Reduction of Error (Mcare) Act to the extent that it excludes abortion facilities not subject to licensure under this legislation.” The bill passed the Pennsylvania State House, 148-43. The bill received no vote in the Senate. [Pennsylvania House of Representatives, HB 574, Final Passage, RCS#322, 5/11/11; Pennsylvania House Committee on Appropriations Fiscal Note House Bill 574, 5/10/11]

HB 574 was Opposed by ACLU and Planned Parenthood. PoliticsPA posted an article highlighting opposition to HB 574 from the ACLU and Planned Parenthood. “The American Civil Liberties Union of Pennsylvania issued a press release, and took the time to post a video campaign to raise awareness about the legislation via Facebook. ‘It is absolutely clear that House Bill 574 is an attempt to put providers out of business. It is not about patient safety,’ said Andy Hoover, legislative director of the ACLU of Pennsylvania. It ‘would effectively close most and maybe all of the independent abortion clinics in Pennsylvania.  The requirements of this House bill will cost abortion providers hundreds of thousands of dollars in building renovations and staff increases. If HB 574 becomes law,’ Hoover added, ‘women will still seek abortion care, but with reputable clinics closed, the chances increase that women will seek abortions from doctors like Gosnell.’ Sari Stevens, Executive Director of Planned Parenthood PA Advocates expressed her strong discontent with HB 574 in the interview with Hoover from ACLU-PA. ‘Texas in particular had a similar bill pass, and 18 of the 20 providers immediately went out of business and never returned to practice,’ said Stevens.” [Source]

Philadelphia Inquirer Editorial Headline: New abortion-clinic rules would harm women. According to a December 2011 Inquirer Editorial, “Gov. Corbett should carefully consider the consequences and refuse to sign legislation that would roll back women’s ability to obtain safe abortions. Before it adjourned for the holidays, the state Senate approved a bill Wednesday that goes too far in tightening regulations on abortion clinics. Supporters say the measure will prevent more travesties such as the deaths of unborn babies that led to murder charges against Kermit Gosnell, the operator of a Philadelphia abortion clinic. Bad clinics that recklessly endanger the health of women and the lives of unborn children should be closed immediately. But that is not the true motivation behind this legislation. This bill represents a blatant attempt to shut down even those abortion clinics that have operated safely and without incident for years. It’s worth noting that Sen. Pat Vance (R., Cumberland), a former nurse who sponsored the original bill, voted against this more draconian version, which dropped provisions that were more directly aimed at preventing another Gosnell atrocity. The Senate bill requires the state’s 22 free-standing abortion clinics to abide by the more stringent fire, safety, and staffing regulations of nonhospital surgery centers. The expense of meeting those standards will put many abortion clinics out of business. Having fewer clinics in the state will severely reduce access to vital health services for 37,000 women, many of them low-income, who seek safe, legal abortions each year, not to mention thousands of others who need birth control, cancer screenings, and other tests. […] These attacks on reproductive health rights must stop, especially in a state that already has some of the toughest abortion laws.” [Philadelphia Inquirer editorial, 12/16/11]