It’s one small step for Moon, one giant leap for Maryland. 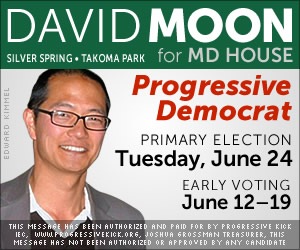 At Progressive Kick we only endorse truly progressive candidates, but rarely do we find a candidate that mirrors our values as clearly as David Moon. He has a long history as a progressive advocate in Maryland and if elected we are confident that he would not only support progressive causes, he would champion them. But don’t take our word for it, below are endorsements from Maryland State Senator Jamie Raskin and House of Delegates member Sheila Hixson. You can also click here to read his answers to our candidate questionnaire.

Click here to donate to our independent expenditure effort to support David Moon for Maryland’s 20th House of Delegate district.

Jamie Raskin, Maryland State Senator District 20 – “Born in Takoma Park to Korean immigrants, David Moon has had an unusually effective career as a grassroots political organizer, civil liberties and civil rights policy consultant and attorney, and founder of the awesome political blog Maryland Juice, which was named one of the nation’s best by the Washington Post.  A champion of insurgent reform politics, David volunteered to manage my underdog campaign for the Senate in 2006 and, through many sleepless nights and by precocious mastery of the new social media, built the organizational infrastructure for the movement that changed Montgomery County politics forever.  Recognized for his dazzling political mind and devotion to social justice in our community, David went on to run numerous successful campaigns at the county and state level. He also used his formidable political skills to mobilize thousands of Marylanders to defend at the polls our legislative victories on marriage equality and the Dream Act. What impresses me most about David is his wonderful modesty, his passion for service to our community, and his love of making both democracy and new technology work for all.  He will make an exceptionally able and faithful servant to Silver Spring and Takoma Park in the House of Delegates, and I support him with pride.”

“David Moon is an intense, accomplished political and community activist. He holds progressive ideals close to his heart and is willing to stand up and fight for his values.  As he says, he ‘is not waiting for Superman.’ David is a civil-rights lawyer and an influential activist in issues that impact our community. He has run political campaigns in which he proved to be an adept strategist and master of social media. He has worked on issues such as the Dream Act and voter registration with Casa de Maryland and has developed an expertise in mass transit as Executive Director of Communities in Transit. For several years,  his political blog, Maryland Juice, has been a must-read analysis of political developments in Montgomery County and around the state.”

Sheila Hixson, Maryland Delegate District 20 – “He knows District 20 from the ground up.  Now he is ready to take the next step as a member of the House of Delegates in Annapolis representing our wonderful diverse district. I will be very proud to serve with David Moon….”