We have a track record of success and are not afraid to hit back hard on conservative attacks. Moreover, we can pledge that 100% of your donation will be spent in North Carolina to bring about a win. Finally, we bring national resources to bear on this race and will be matching the first round of donations. 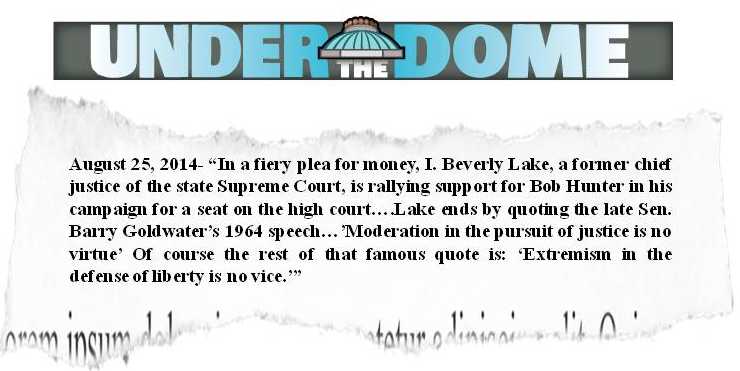 THE STAKES ARE HIGH

In recent years North Carolina citizens have seen an unprecedented effort to use government to rig the rules for a partisan agenda. In particular, the repeal of “Voter-Owned Elections”, which previously kept special interest money out of judicial elections, was a big blow to ensuring judicial integrity in the state. Now, as never before, it is vital that we elect progressive judges to the courts. We have seen the special interests’ slanderous attacks, with the infamous million dollar ad buy attacking Justice Robin Hudson claiming she went easy on child molesters being only the most well known example. With your help, Progressive Kick will counter efforts like those.

The power of the courts to interpret the law and impact the culture of a state is immense and often greatly underappreciated. Pending actions working their way through the courts include challenges to the legislative redistricting effort, the voter ID law, attacks on teacher tenure, and the cutting of voting opportunities for citizens. While voters are focused on higher profile federal and local elections, the most consequential elections for their daily lives are occurring unnoticed in judicial races.

The recent activity of the Republican supermajority, rubber stamped by a Republican Governor, has generated a raft of court challenges to legislation written and passed without moderate or bipartisan inputs. Much of this legislation goes against established precedent and will be overturned during the checks and balances process, but only as long as we work to ensure that the court is representative of the true will of the citizens of North Carolina. We can only do that if people like you allow the voters to hear a full debate, and not merely an onslaught of one sided and untruthful attack ads.

Recently we have seen the courts rule unconstitutional a voucher program designed to take $10 million from public education to fund private schools.

Soon the courts will review other harmful legislation such as those designed to take away the freedom of women to regulate their own healthcare, create undue burdens on the fundamental right to vote of poor and minority voters as well as the state’s anti-marriage equality constitutional amendment. The last line of defense for our rights is a progressive, fair minded court.

THE PATH TO VICTORY

Focus on candidates who are viable, need help, and are progressive. By strategically focusing on the handful of races where a difference really can be made, we are able to make the biggest impact on the makeup of the Supreme Court and on the Court of Appeals races. We use polling and knowledge of the individual campaigns to hone our message and tactics in order to make the most of precious resources.

Not flinching from the fight. Both sides know the stakes in these elections but often only one is willing to go all in to win. We can say what candidates would be afraid to for fear of being labeled as “going negative.” This resolve is strategic—and necessary—considering what we have already seen from the other side.

Apply modern technology and targeting to concentrate impact. We use the latest research and work with the Analyst Institute to deliver the best return on investment for donors’ contributions by concentrating our efforts on behalf of multiple campaigns in one operation. Instead of diffusing support across multiple campaigns that may redundantly go after the same sets of voters, donors can maximize their impact.

Give it everything we have. 100% of your contribution will be spent in North Carolina to win. It will not be diverted to other states or elections. Moreover, we provide full transparency to donors. Finally, individuals or organizations donating $50,000 or more have the option to earmark contributions for preferred candidates.

You can donate online by clicking here or by check.  Contributions can be made out to “Progressive Kick IE North Carolina.”

To learn more or to make a contribution contact us today: